You are here: Home / Fitness / 5 Killer Ab Exercises For A Ripped Six Pack 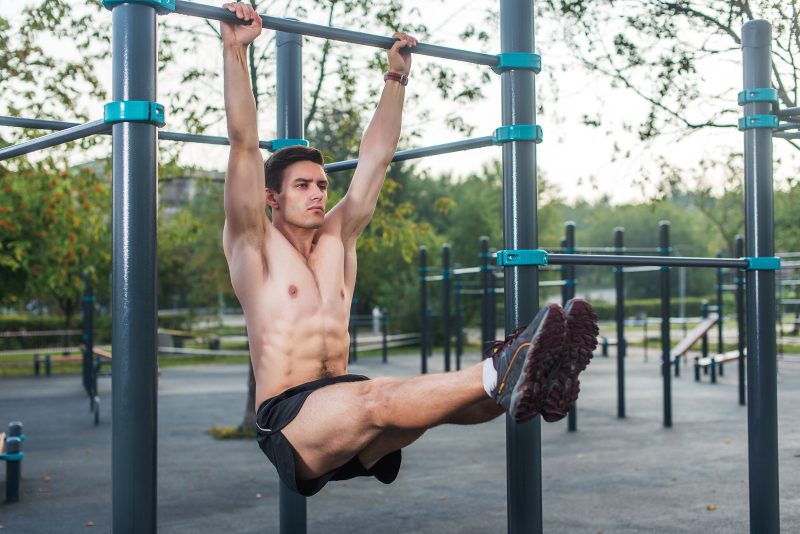 Have you ever wanted ripped, 6-pack abs? Yes? Welcome to the club.

Here are 5 killer ab exercises that will improve both the aesthetics and functionality of the core for better performance.

This movement will give you a burn so good you feel it in the deepest parts of your abs. First, you need to start in the hollow hold position. Begin by lying flat on your back then lift your shoulders off the floor and tuck the chin in for that triple chin look (the uglier the better). Next, lift the legs off the floor to about a 45-degree angle while keeping them straight and the feet flexed in pointing towards the nose.

The most important part of this position – and this exercise – is keeping your lower back in contact with the floor. To do so imagine trying to squish a bug underneath your lower back, push it down hard and flat. Now that you are in the proper hollow position you can begin the sweeping motion.

Raise your arms up and behind your head then slowly move them towards the hips with the palms up, once there return overhead and repeat.

You may frequently see this exercise done by trainers and athletes alike but chances are you see them performing it wrong. That’s right, there is a correct way to perform this exercise and I am going to explain it to you now so pay close attention.

Find an ab wheel and take a kneeling stance. Place your hands directly underneath your shoulders with your hips in-between the knees and shoulders. Squeeze your glutes and suck your abs up and in to create a posterior pelvic tilt (PPT) which keeps the abs activated and leaves the low back out of the equation. This is your starting position.

From there, slowly roll the wheel up and out in front of your eyes while keeping the core braced. Only go out as far as you can hold that braced position then return to the start. The key here is keeping the hips in the same PPT throughout the full set.

We all know the side plank but this one is a hidden gem for creating a strong, toned mid-section. Start by lying on your side with your elbow directly underneath the shoulder. Stack your feet on top of one another and drive the hips up to the ceiling to get into position. Simple enough, right?

Now come the hidden gems that will make this exercise the killer it is. Squeeze your abs up and in as well as the glutes to create a neutral pelvic tilt and full core engagement. Lockout your legs by straightening them out as much as possible and then actively push the elbow into the floor to activate muscles within the shoulder and core you didn’t know you had.

You now have full body tension. If you can hold this position for more than one minute you are probably doing it wrong but if you fall on your ass after 20 seconds you are right on track.

This exercise requires the use of a resistance band or cable machine. Grab ahold of your equipment and step away from the source to create some tension. You will start with your hands clasped together in the middle of the chest with your core braced – abs squeezed in and glutes contracting.

Now, without losing your position, press the hands away from the chest straight in front of you until the arms are fully extended. Hold the position for 3-5 seconds then return the hands back to the chest. This exercise requires massive amounts of core stability and so it will activate the abdominals and obliques to a significant extent.

The keys to performing this exercise correctly are to not rotate the hips or shoulders at any point by keeping them facing forward and not shrugging the shoulders upwards but instead keeping them down and together. This exercise can be performed in a variety of positions including standing, kneeling, and half-kneeling.

This exercise is a killer. Its ability to engage the bottom half of the abs which is a tough spot to develop is second to none. Start by finding a pull-up bar and grab a shoulder-width grip. Continue to hang from the bar ideally with the feet hanging off the floor and arms straight.

From this position set the core by bracing. Now raise your legs straight ahead of you as high as you can. Try not to overuse the hip flexors on this one by focusing your attention on the lower abs.

If you have trouble with this exercise with straight legs you can work your way up to it by starting with the knees bent and instead raise the knees as high as you can. This will still hit the same muscles it just makes it slightly easier.

So, there you have it, 5 killer ab exercises to throw into your upcoming workouts to get your mid-section shredded and functional. Give these exercises a shot and let the results speak for themselves.

This article is by Kyran Doyle, a certified, incurable workaholic. When he’s not lifting heavy things he can be found online at fitnesscrest.com. His goal is to humbly empower others to grow stronger and take control of their health and fitness as he continues to grow himself as a lifter.

Filed Under: Featured, Fitness Tagged With: abs, fitness, health & fitness, workout
Recommended reads:
How To Be A Better Man
Best Men’s Sites and Blogs
Pendlay Rows – What To Know