You are here: Home / Culture / Suicide Girls Founder on Self-Expression, Being Different and the Blackheart Tour

Suicide Girls Founder on Self-Expression, Being Different and the Blackheart Tour 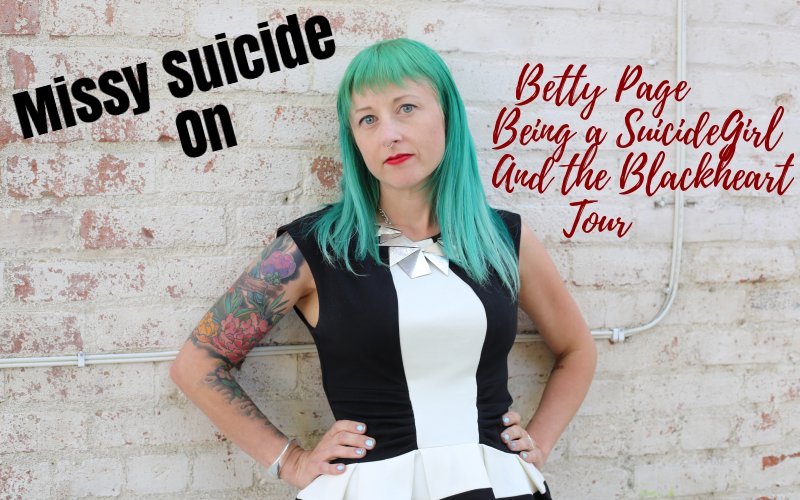 While it started as a personal ideal, the Suicide Girls have grown into a nation of women that pride themselves on being different. As Missy Suicide, founder of the Suicide Girls has explained, these ideals that they were founded on have also become their path to success. “I’d rather be known for something, not [for] what I’m not,” explains Missy.

So we understand that being a SuicideGirl means being different. But what we learned is the word ‘different’ is best defined as confidence, self-expression, self-empowerment, and freedom. And when one soft-spoken woman develops the voice to speak for hundreds of thousands of women around the world, and those women collectively become a community that is poised to change the way the nude female form is perceived and celebrated – we wanted to be a part of that.

She is brilliant, engaging, and everything the world never knew it needed – She is Missy Suicide, and we jumped at the opportunity to speak with her this month.

Confidence is the sexiest thing a person can have.”

Missy Suicide: Hi, how are you?

Urbasm: We’re doing great. Did you have any questions for us before we start in on the questions we had for you?

Urbasm: That would have to be red.

Missy Suicide: I like orange… so we’re simpatico (laughs). We’re in the same family.

Urbasm: (laughs) Yes, we are. So, tell us what’s in store for the SuicideGirls this year? We know you have the big Blackheart Burlesque Tour going on right now.

Missy Suicide: The tour is 53 cities; we’re going across the US. We’ve got a lot going on right now, actually. We’re doing the Blackheart Tour, I’m working on a book, we’re…

Urbasm: Is this your second book?

Missy Suicide: Oh no, we’re doing a photo book as well, but I’m working on a memoir book.

Missy Suicide: And we’re hoping to do another issue of our comic book (pause). Just waiting on taking over pretty much all media.

Urbasm: (laughs) As it should be. So, do you attend these tours personally?

Urbasm: How do you decide which cities are going to be put on your list?

Missy Suicide: Luckily, we’ve been on the road for – I think this is our fifth year. We’ve gotten to know the country pretty well and which markets to go to. We book our own tour, so we know which venues we like, and which ones give us the best reaction. We are hoping this will be our biggest and best tour yet. Not only in terms of the themes, props, routines, and girls – but also in the actual venues themselves. We really tried to pick the ones with the best sight lines, so the audience can see the entire show from wherever they are.

Missy Suicide: It’s important to us that our fans have a really good night. We want everyone to leave with a smile on their face.

Urbasm: (laughs) That shouldn’t be a problem. In past interviews, you’ve described the SuicideGirls a certain way, but we were curious if that definition has changed over the years as things have blossomed.

Missy Suicide: I think it hasn’t changed that much. It has always been and will always be girls to celebrate their individuality – to embrace their body and themselves. That confidence is the sexiest thing a person can have. I think the brand of women on the site has definitely evolved over the past 15 years. When we started, we were primarily Portland-based, and I shot the images of a more limited pool. And now we’ve got over 3,000 official SuicideGirls all around the world, including Antarctica.

Missy Suicide: So, the range of girls has changed. And in addition to the 3,000 SuicideGirls, we have over 250,000 hopefuls.

Urbasm: What is a “hopeful”?

Missy Suicide: Hopefuls are – when you apply to become a SuicideGirl it is a process. It is a long involved process, and it is about becoming a part of the community as much as sharing your images. We get about 50,000 applications every year and women fill out the paperwork and submit a photo set and that goes into their account to the site, so they can become a part of the community and get feedback on their images. The feedback on their images – and these are nude images that women are posting on the internet – and the comments are so supportive, constructive and helpful. It is really amazing considering the state of the internet. You can’t post a picture of your breakfast without getting called a slut.

Missy Suicide: We’re a community online that is positive and supportive. Where people can share their ideas and feelings without getting them reduced to base level commentaries. It is… (pause) pretty cool.

Urbasm: Very cool. So, what do you think is the sexiest thing about a woman’s body?

Missy Suicide: For me, I think it is how confident they are, and how they decide to use their body. How they decide to showcase their personal style, whether that is tattoos, piercings, colored hair, or accessories. What excites me the most – is how each person is unique.

Urbasm: We like that. If you could go back to any part in history, who would you most like to photograph?

Missy Suicide: Betty Page started it all. That would be… (pause) amazing. Her personality shined through in all of her images. Especially the ones that Bunny Yeager shot of her. I would pretty much die if I got to shoot a Bunny page.

Urbasm: And you usually prefer to use women as photographers, is that still true?

Missy Suicide: Yeah, so I feel like there are some things that women just have a different take on what is sexy. The photo shoots are designed to showcase how each girl feels sexy about herself, as opposed to what the photographer thinks is sexy. So, they have conversations with the girls beforehand to try to figure out what they want to showcase and highlight. I feel like a female photographer’s shutter is going a half second before and a half second after a man would shoot. It is when a woman is in more of a more natural pose. The height of her laugh. As she is entering the pose. We have a lot of great men photographers, don’t get me wrong, but I think that there is something intimate when a woman is not trying to be sexy for a man. It is different. It is when she is trying to be sexy for herself.

Urbasm: Which leads us to our next question – what is the legacy that you would like the SuicideGirls to leave behind?

Urbasm: You are well on the way there. What would be some advice that you could offer us regular blokes on how to make our women feel more confident and sexy in our personal relationships?

Missy Suicide: If at the end of two weeks she is still self-conscience about it, suggest getting a tattoo on that area, or piercing it. Because you love her and want her to feel happy about all of her.

Urbasm: That’s some great advice. And we have a quick question from one of our writers, Max Green. He wanted to know what the SuicideGirls thought of the movie Suicide Squad?

Missy Suicide: (laughs) It was pretty bad ass if you like Harley Quinn. She is such a strong female.

Urbasm: There you go, Max. And last, but not least – what are the three things that every man should know – according to you, Missy?

Missy Suicide: Okay (pause). Wow – So, every man should know how to bring a woman to orgasm.

Missy Suicide: They should know how to give her a hug when she just needs somebody to listen to her, and not try to fix her problems for her.

Urbasm: That’s a big one.

Missy Suicide: Be supportive. (pause) And every man should know how to make a girl laugh.

Urbasm: And that is not always easy.

Urbasm: We love it. Thank you, Missy.

For a current schedule of the Blackheart Burlesque Tour, and to buy your tickets online – visit BlackheartBurlesque.com. And then visit SuicideGirls.com for ‘everything’ else you need.

Filed Under: Culture Tagged With: culture, interview, women
Recommended reads:
How To Be A Better Man
Best Men’s Sites and Blogs
Pendlay Rows – What To Know