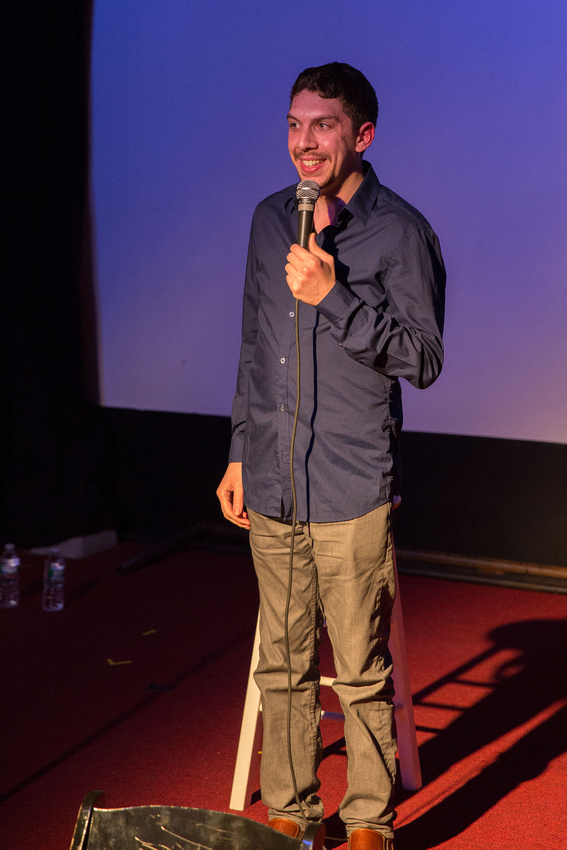 Max Cohen is one of Urbasm’s favorite comedians. He originally hails from the scenic suburbs of Maryland, and has since found himself in the more scenic subway platforms of New York City. Join us as we find out what it’s like to be a funny man the other 23-hours of a day.

Home: I live in New York City, so I’m pretty limited to just an apartment. I just moved to a one-bedroom with a balcony, and it’s the first respectable place I’ve had since moving here in 2003. One day, I’d love to have one of those epic apartments seen on “Million Dollar Listing.” (TV personalities be damned, it’s teaching me about great apartments and suits, so I don’t feel too bad watching this show.)

Man Cave: Do guys still have this? Is this just code for the bathroom now? I live with my girlfriend, so the closest I have to a man cave is when she visits her family for a few days and I’m alone in the apartment. Then it’s underwear and take-out containers everywhere.

Gym: I’m a big fan of swimming. Even though it can get pretty boring, it’s nice to have some time where I’m removed from staring at any electronic screen. I just started using the sauna, too, and that’s great. A good schvitz can really help you through your day.

Automobile: Taxi cabs, baby. No worries about mileage, maintenance, or gas prices. I just pay the man and am done with it all.

Restaurant: I always love a good steak, and I had a great one at Smith & Wollensky recently. But for a real favorite restaurant, somewhere I can always rely on, is either Ocha Sushi or El Rancho Burrito, both in Hells Kitchen. I’ll probably eat at one of those places after I finish this thing.

Travel: My favorite way to travel is getting onto the subway platform right as a train is pulling up. Even with comedy, I can’t think of anything with better timing than that. The whole trip will be smooth sailing for me if I can get that to happen. 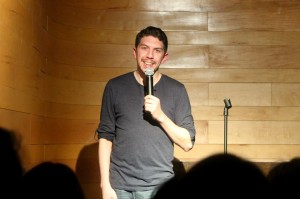 Inspiration: Richard Lewis. When I was learning about the big names, Bill Hicks, Lenny Bruce, Carlin, Pryor, they all stood for something and represented big shifts in what comedy could do. Lewis was the first comic I watched where I realized I could just play in my own head (for better and for worse) and explore around there. Ideally, though, I’d need less therapy that Richard.

Meditation: It’s absolutely great. I end up doing it most while swimming. My only goal there is just to make sure I keep breathing (above water). There’s something about focusing on breathing for a while that lets me come back to any problems or worries without feeling like they’re crushing me.

Quote: “Hope – captain of the ever twisting minds of men,” -Pindar. I read it in college and thought this was the fanciest way I would ever hear “Don’t give up.”

T-Shirt: I have a nice blue Henley jersey with roll-up sleeves that is pretty much my go-to shirt for hanging out with friends.

Pet: I don’t have any right now. One day there will be a dog, and it will be awesome.

Gadget: Iphone 5, because even with the crummy battery life, it’s just so useful.

Cologne: I don’t use any. But my girlfriend is a big fan of my combination of Lever 2000 with Aloe soap and Old Spice deodorant, so I just go with that.

Drink: Auchentoshan scotch, 12 year old. I can’t afford the older ages yet. I also just started playing with some good whiskeys, like Bulleit. I like them neat or as part of a cocktail.

Film: Annie Hall. I saw that when I was a kid and it made me want to live in New York.

Actor: Philip Seymour Hoffman was so fascinating on screen in whatever role he had, large or small. The first time I was ever interested in watching “The Hunger Games,” was when I found out he was involved.

Band: Red Hot Chili Peppers are reliably great. They’re one of the first bands I listened to, and it’s been cool to see how they evolve and change over the years and still put out good music.

Author: Michael Chabon’s “The Yiddish Policeman’s Union,” and “The Amazing Adventures of Kavalier & Clay,” are two of the best novels I’ve read recently. Also, nothing hit home quite as hard as “Portnoy’s Complaint,” by Philip Roth, so it’s between those two.

Comedian: I guess this is different than the inspiration question. Aside from Lewis, I love to watch Joan Rivers and Vicky Kuperman. The two of them are just completely hilarious. Joan’s been doing stand-up forever, and a lengthy career like hers is something I hope I have. 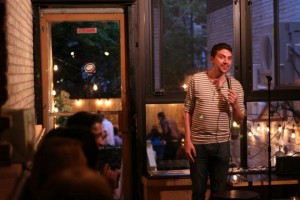 Pickup Line: I was always terrible at these. I never figured out how I was able to get dates. A few times I would just make fun of where the girl went to college. One time, in Boston (before my girlfriend), I really just said “I’m a comedian in New York,” and that was all it took! I’ll always remember it because it’s the only time comedy has worked for me like that.

First Date: There’s a great bar in the West Village called Fat Cat. They have live jazz music, plus a ton of games to play. It’s low-key and a lot of fun, and it’s a nice break from dinner-and-a-movie kinds of ideas.

Prank: Nothing has ever come close to what my high school Health class teacher did. We saw a video that was this extreme close up shot of a doctor delivering a baby. As the kids in my class freaked out and started screaming, my teacher just said, “You think that’s gross? Watch this,” and hit rewind on the tape. The sight of a doctor trying to push the baby back into the woman was the grossest/funniest thing I’ve ever seen. If I remember correctly, some of the kids ran screaming out of the room. The whole time the teacher just stood there smiling and laughing to herself. It was the smile that meant, “This is why I don’t retire.”

Guilty Pleasure: Lately it’s reality shows. “Million Dollar Listing,” is interesting just to see what kinds of huge luxury apartments are available, and “Bar Rescue” is hilarious. Jon Taffer just yells at people until the bar is successful. I think we could all use someone like that.

Way to Get Dirty: Just some olive juice in a vokda martini. 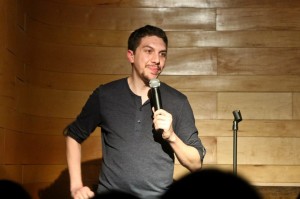 Max has performed his unique brand of self-deprecating yet hilarious comedy at clubs from Seattle to South Africa. He brings the confusions and bewilderment’s of his life from the family dinner table to stages such as the Gotham Comedy Club, Broadway Comedy Club, and Stand Up NY.  He was a semifinalist in The Great Long Island Laugh Off and published in Urban Male Magazine.  Max was recently in the New Orleans Comedy Arts Festival, Laughing Devil Comedy Festival, the SENE Film, Music & Arts Festival, and has appeared on The Wendy Williams Show.You can find Max on

You can find Max on Facebook, Twitter, Youtube, and can purchase his debut album, “Operation: Pastrami Sandwich” on iTunes, Amazon, and most other major music services.

Filed Under: Entertainment Tagged With: comedian, entertainment, funny, interview, Joke of the Week from Funny Man
Recommended reads:
How To Be A Better Man
Best Men’s Sites and Blogs
Pendlay Rows – What To Know