You are here: Home / Culture / Survivors – Overcoming a Hostage Crisis 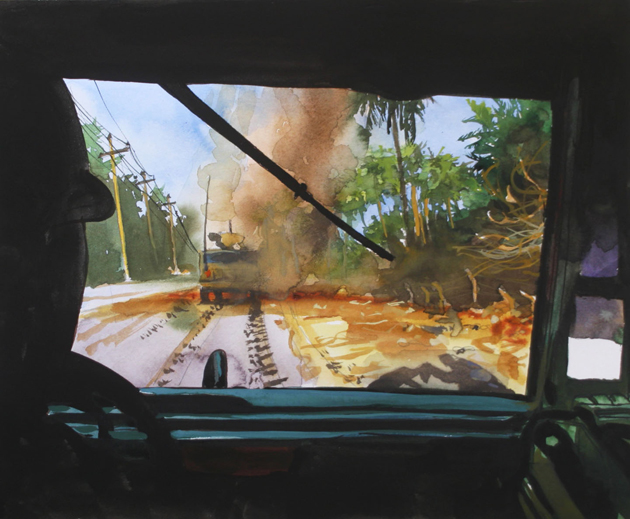 The 92’-95’ war in Bosnia was complex and convoluted to say the least. I was a reporter following up on a story idea with a religious angle, and was asked to join a peace keeping military patrol that took us deep into bandit country. The cold rain had started driving hard at the windshield of the Land Rover, when all of a sudden the wheel of the troop carrier ahead exploded.

We quickly realized it had been the result of a half-cocked IED (Improvised Explosive Device). With our line of three vehicles stopped, we had to clear the damage before we could continue. It was at this point we realized we were not alone. Several dozen armed local militia circled us.

The small number of peace-keeping soldiers were quickly disarmed, and we were led away to a farmhouse, while our vehicles remained on the road. The person who was the self-styled militia leader left us under the watchful eye of two of his trusted soldiers. With all respect, the best that could be said about these two, were they were even too dumb to get a role as real-life Dumb and Dumber characters in the popular movie.

Inside the farmhouse, the peace keeping soldiers were lined up and made to kneel on the ground. Since I had a camera and a small crew, we were left in the middle of the farmhouse floor. The attention of our dumb and dumber captors was very much on the soldiers as they encouraged us to film as they knelt. As they did, the head guy was gesticulating and waving his automatic pistol as though it were a feather duster. It was at that moment I noticed it wasn’t cocked and the safety lock was engaged.

I waited not one second longer.

I swung the expensive Sony camcorder as hard as I could to engage the head of the guy with the pistol. I was strong, fit, and super-positive in my motivation. As his head made contact with my heavy lump of a camcorder, he hit the ground with a huge thud.

This move took the attention of the other guy holding the AK-47, who’s reaction time was akin to the Titanic attempting to turn and avoid the iceberg. The peace keeping troops didn’t need a second chance, they were highly trained NATO forces, and quickly overpowered him.

The coast was clear to leave the farmhouse. We piled into our vehicles which had been carelessly left on the road. We hastily turned around and fled the scene as fast as we could to the ‘safety’ of the media compound.

I was complimented about my taking what the soldiers had called, “immediate action”. The whole thing could have easily backfired, especially if the other militia had still been outside the farm building. But it didn’t, and we got away with our lives.

Survival is a mindset–If you’re a sheep, you’re not going to survive!

Story by Brian Sterling-Vete
Brian is a Guinness World Record Holder, producer of a new documentary series about the real origins of the USA  (www.majorvision.tv), and author of Mental Martial Arts—The Shaolin Secrets for Business and Life. You can get his book here.

Filed Under: Culture Tagged With: fight, how to be a man, man advice, survivors
Recommended reads:
How To Be A Better Man
Best Men’s Sites and Blogs
Pendlay Rows – What To Know