You are here: Home / Featured / Three Things Every Guy Should Know About His Di**

Three Things Every Guy Should Know About His Di** 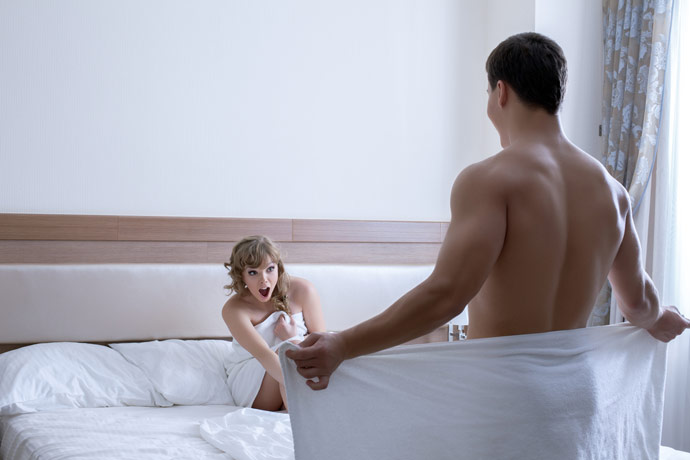 When man first noticed his happy stick as a boy, it was a wonderful and mysterious friend. They’d spend the next several years growing up together. Then, one day he’d stare down at it, and wonder how he could make it bigger. He’d imagine hanging weights from it, taking strange herbs, and asking a masked stranger to cut it off, pull it out from his body cavity, and reattach it with some stitches, glue, and maybe a prayer. Then he’d say to himself, The hell with it, and finish his breakfast.

In a world without science, every man’s bench press, height, girth and weight would be either extra large, colossal, or magnum. However, thanks to a bunch of drunk gentleman that let female researchers size them up in a van just outside a bar, we now know that the average guy is anywhere between six and seven inches, yet we all imagine it to be about one inch bigger than it really is. Now just think about that for a moment. If you’ve ever felt that you were small, just imagine how small you really are? However, the good news is that none of us are alone. In fact, one guy by the name of Ricky Bledsoe wrote a book about small di**s and called it Penis Envy. Get it here.

Ricky’s early sexual experiences with sex were traumatizing. This is around the time he realized that he had two choices. Either put out five figures to have his Johnson sliced at the trunk, pulled out a couple inches, and then sewn back together, or find an alternative means of satisfying the ladies. He chose the non-surgical route, and this is my cue to ask Ricky his three tips that every guy should know about his manhood.

“You gotta release the floodgates before you get anywhere near her,” says Bledsoe. “You gotta get that tension off of you. Your cool and calm demeanor is what dictates her response to you, and it’s the only way you’re gonna last if the night goes well.”

Max Green (MG): I saw how that technique can sometimes backfire in the film, ‘Something About Marry’.

Ricky Bledsoe (RB): You gotta be completely spent before you even lay eyes on her. That’s gonna buy you three extra strokes.

RB: Hey, that might be just enough to get her to climax. I don’t care if Halle Berry is in front of you; If you just finished choking the chicken, you can have a relaxed, laid-back attitude, and that’s what attracts girls in the first place. For more details on this, read chapter six in Penis Envy, which is called Don’t Let Premature Ejaculation Be Another Reason To Run Her Off .

MG: What about the guys whose biggest problem is the women who are falling out of bed laughing, before he can even get it in.

MG: But what if you’ve only accomplished becoming the head dumpling fryer at a Kentucky fried drive thru?

RB: Read my book, it explains in detail how to Make A Lot Of Money.

Tip Three: Your Attitude—Make it About You, Not Her

RB: Women seem to like it better if you don’t compliment them too much. For instance, half of her best jokes; don’t laugh. Matter of fact, show her she has room for improvement, especially the most gorgeous type that really gets your motor running. You need to figure out a subtle way to downplay her looks, or she and her big butt are gonna walk all over you.

MG: I like it when big booties walk on me.

RB: Only when you’re both naked.

MG: What if a guy’s so nervous about his di**, he forgets how to use it?

RB: If you’re nervous and fumbling all over the place trying to make a good impression, you need to get that engine back into idle mode (see tip #1, above).

MG: One time I made a girl lay in a puddle of mud, so I could cart a 24-pack of Fat Tire beer over a pothole and into my first floor condo, with hopes of then getting her drunk enough to have sex with me.

RB: The last thing she needs is to feel rushed or hurried into sexual or intimate contact. If you can slow yourself down a bit, then she will be the one who is in doubt of her sex appeal, and next thing you know, she’s rushing you into bed!

MG: Then all I’d need to do is inflate my bed, and my other girl, and it would be time for a Ménage à trois.

Filed Under: Featured, Sex Tagged With: interview, relationship, relationships, sex, three things every guy should know
Recommended reads:
How To Be A Better Man
Best Men’s Sites and Blogs
Pendlay Rows – What To Know