You are here: Home / Entertainment / Football Season Survival Guide For the Non-Sports Guy 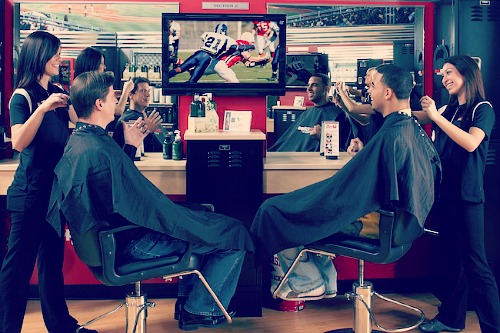 You know the scene: You’re sitting in the barbershop, a lone mute in the midst of a football debate fit for Sports Center. The men spit their opinions and then turn to you, wide-eyed, encouraging you to offer your take, to reveal your loyalties. You can see the speculation in their eyes as they look you up and down, assessing you, taking mental measurements. Is he a Patriots fan? Or a Giants fan? Or worse, a soccer fan?? You panic, searching for any tumbleweed football fact that might skitter across the whistling desert of your sports memory. Does Joe Montana still play football?? You shift in your chair. You can’t risk mentioning him. You don’t even know if Joe Montana is still alive. And then even your gay barber, who has an oil painting of him and his partner mounted on the wall, says, “The Cowboy’s defense is useless. Absolute trash.”

And you? You’ve got nothing.

When you respond to their nonverbal demands for your viewpoint with nothing but a small smile, their eyes narrow, their grins falter. They glance at you nervously, inevitably searching for the remote to the explosives you must be hiding under your Non-Sports Guy shirt, because only the next Unabomber wouldn’t be into good old fashioned American football.

(If you don’t know this scene, it’s because you are one of the sports fans in the barbershop—or the bar or cocktail party or at the office. Congratulations.)

Sure, you could admit that you aren’t into sports. It’s fair. Understandable, even. You could also say that you don’t like U2, or pizza, or puppies, or that you just couldn’t get into Breaking Bad. But sometimes honesty isn’t the best policy—it isn’t worth the suspicious eyebrow raise. It isn’t worth a stranger reporting you to the authorities, following the advisement “If you see something, say something.” So you play along. It’s almost the polite thing to do. A generic sports comment for ease of conversation is the equivalent to laughing at somebody’s lame joke, or holding the door for the old lady behind you even though she’s taking her sweet ass time. It’s harmless social etiquette.

So, for the Non-Sports Guy, here are a few reliable statements to plug into sports talk. I.e.: camouflage. They’re not so vague that you’ll look uninformed, but universal enough that they won’t solicit further explanation:

At this point, Non-Sports Guy, you might be wondering, But what about hockey? What should I say about hockey?

And the answer is: nothing. It’s sweet of you to think anyone below the border cares about hockey.

This weekend, spend Sunday doing what you really want: watch Van Damme movies, hike, or play Minecraft with (or without) your kids. Thanks to these six go-to phrases, rest easy; your secret is safe with me.

Alena Dillon is the author of humor collection, I Thought We Agreed to Pee in the Ocean. She has her MFA from Fairfield University and lives in New York with her husband. Follow Alena on Twitter: www.twitter.com/TheAlenaDillon

Alena Dillon is the author of humor collection, I Thought We Agreed to Pee in the Ocean. She has her MFA from Fairfield University and lives in New York with her husband. Follow Alena on Twitter: @TheAlenaDillon

Filed Under: Entertainment, Featured Tagged With: entertainment, funny, humor, opinion, Sports
Recommended reads:
How To Be A Better Man
Best Men’s Sites and Blogs
Pendlay Rows – What To Know

Alena Dillon is the author of humor collection, I Thought We Agreed to Pee in the Ocean. She has her MFA from Fairfield University and lives in New York with her husband. Follow Alena on Twitter: @TheAlenaDillon