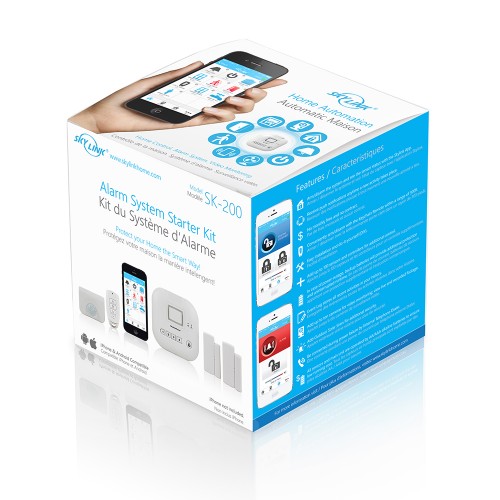 Skylink has been designing home security kits in a box for several years. In fact, I personally own one of their older models (the SC-1000) that I purchased back in 2009. And you know what? I still use it and have no complaints. I don’t live in the worst neighborhood by any means, but it gives me peace of mind to know there is something left behind to deter a would-be thief when I leave for the day or give me a heads up if someone should happen to visit me in the middle of the night while sleeping.

So when I was contacted to try out their new app-based system at no cost, the SK-200, I was looking forward to seeing what Skylink has been working on for the last six years since I’d bought their original system. The first thing I noticed is that the new system is more attractive and compact. The individual sensors are smaller, lighter, and really only require double sided tape to secure to your house, condo or apartment. The old system was a bit heavier and cumbersome to install. It is still a proprietary kit, so you can’t mix and match other manufacturers, but their prices are competitive enough that this shouldn’t be a problem.

You could literally have this starter kit installed and functioning in about 30 to 45 minutes when using the double sided tape to install each component. All you do is place the control unit within reach of your modem (you’ll need to plug it in) and also somewhere that the alarm can be heard (the speaker is located on this). Then choose your two most potential break-in points for the door/window sensors and you also get one motion detector that can cover a rather large area of windows and doors without the necessity of using a sensor for each one. 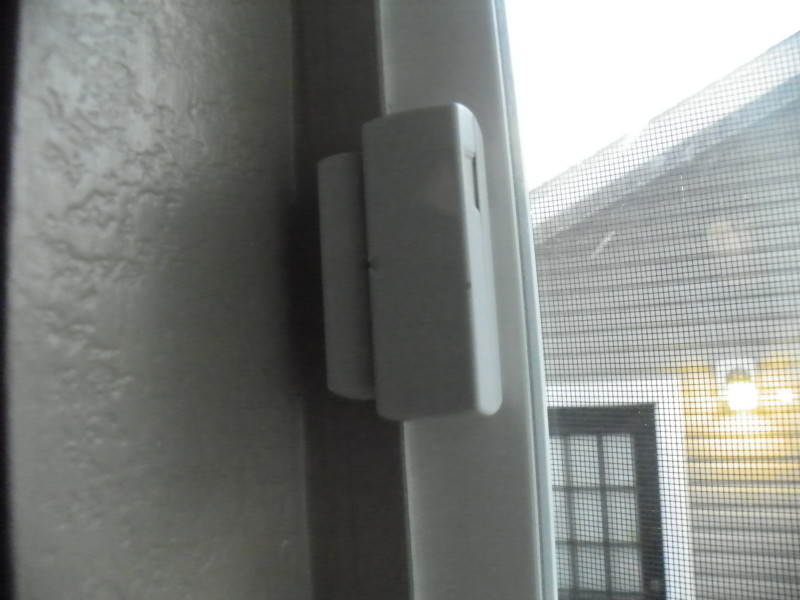 For an apartment, this kit might be all you need. If you live in a house, you may need some additional sensors, but we will get to that in a minute. The door/window sensors come with two components to install – one for the door/window frame and one for the moving section of the door or window. The way they work is simple: When one side is separated from the other side (as when opening a window or door) it triggers the alarm. 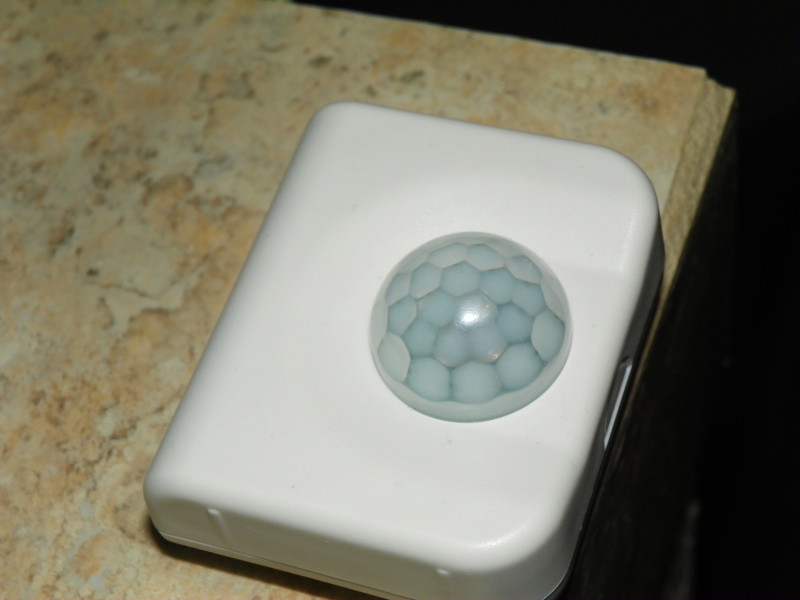 The motion sensor should be placed in any open space in your home where you want to protect a fairly large area. According to Skylink, it can cover any area within a 110-degree spread out to a distance of about 10 feet. In other words, it will almost completely cover any room approximately 10 feet by 20 feet if you place the sensor somewhere in the middle of that room. 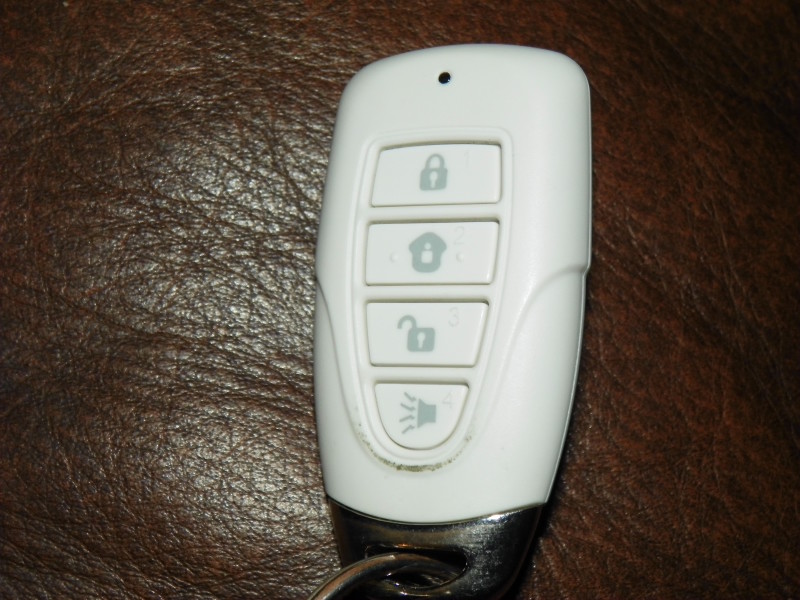 Skylink has already pre-programmed the remote control to work with the main control unit, and the longest part of the install will be taking on the task of connecting each component to their free SkylinkNet app which can be located here for Android or here for iOS devices. 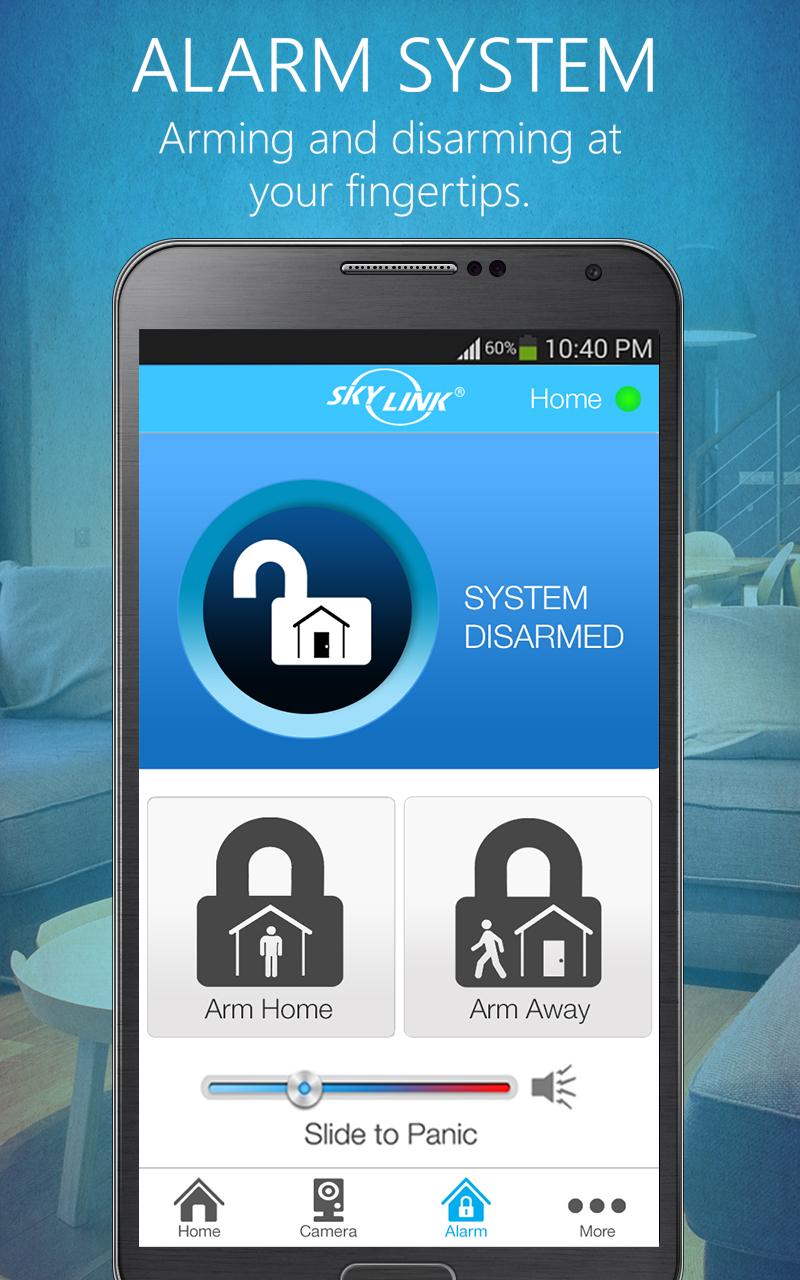 The remote (and app) feature a panic button, which sets the alarm off immediately. They also enable you to “arm home”, “armed away” and “disarm”. So when you are leaving for the day you click the “away” button, it gives you plenty of time to exit your home and then it arms both window/door sensors and motion sensor. For your convenience, the “home” button gives you the option to change this configuration. So let’s say that you spend the evenings in your living room, so you obviously wouldn’t want the motion detector to go off every time you get off the couch. The “arm home” allows you to disengage the motion detector so that you can wander around the house while still having the peace of mind of the two door/window sensors.

And while there are only two door/window sensors in the starter kit, that number can be customized to as many as you need via a separate purchase of around $20 per sensor (excluding the IP camera). You can add extra motion detectors, garage sensors, water leak sensors, light switch controls, keypads, outdoor sirens, and remotes. While checking out this basic kit, I also took the opportunity to purchase the Skylink light/dimming receiver and wireless indoor IP Camera by Skylink. 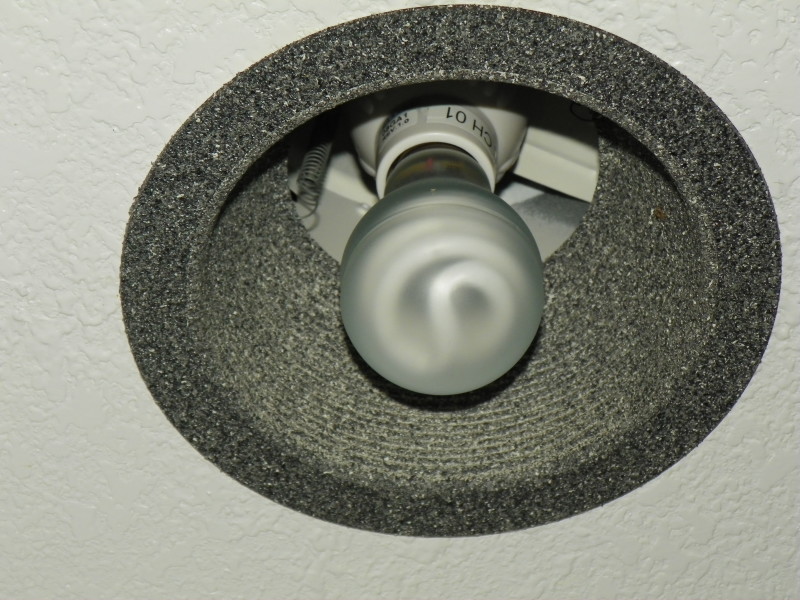 The Skylink LX-318 Dimming Receiver allows you to control one 60W bulb in your home through the convenience of the SkylinkNet app. You can dim most lights to create mood lighting and it also enables you to create specific schedules for the light to turn on and off. 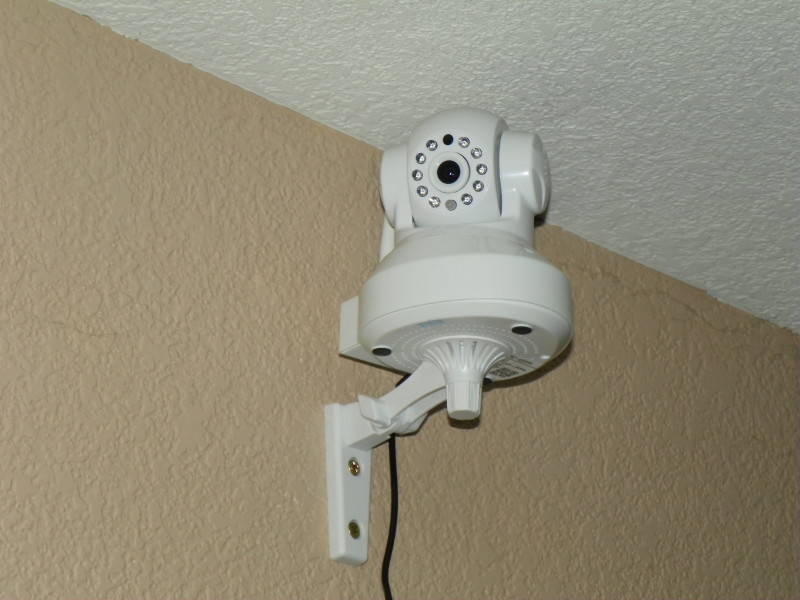 features night vision, pan/tilt and comes with a built-in microphone and speaker so you can be heard as well as hear what’s going on in the room. It is pretty much a Plug & Play device that can either be placed on any flat surface or hung on a wall with the included hardware (shown above). 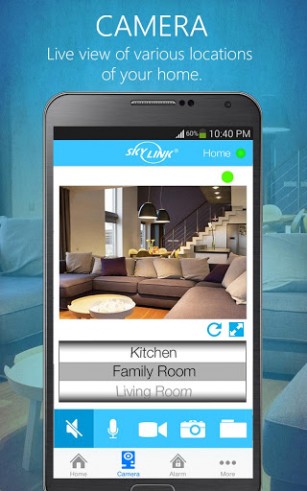 The picture on the camera is detailed enough (HD 720p resolution) to see what you need to on the app and it loads up quickly enough to capture live movement (albeit a little choppy). You can also switch between multiple cameras and record and save footage to your device. Overall, the camera works as expected and if you spend a lot of time away from home worrying about your dogs, cats, a nosy roommate or kids… this is definitely the answer to soothing some of that anxiety. 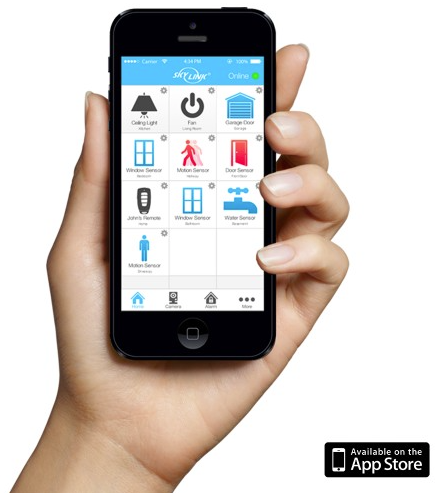 As the picture above demonstrates, the SkylinkNet app lets you know when it has detected activity in your home with an audible sound and visual (red) alert. This way you pretty much know what’s going on in your home from moment to moment which is way more convenient than the old ‘dialing’ units that would call you whenever the alarm was tripped. Skylink has also made some nice upgrades to both their Apple and Android apps since its introduction early this year, and the bugs I had previously noticed seem to have been worked out for the most part.

If you’ve been considering signing up for a monthly home security plan, this Skylink kit is one option that will cut out the middle man (a.k.a. monitoring company), save you money, and you might find there isn’t much advantage to 24-hour monitoring – especially if you regularly keep dibs on your phone.

The Skylink SK-200 is a great starter system for a one-time payment of only $150, although I would highly recommend the IP camera for complete peace of mind. And if you’re curious to know what other buyers are saying about this kit, take a look here

Filed Under: Tech Tagged With: home, tech
Recommended reads:
How To Be A Better Man
Best Men’s Sites and Blogs
Pendlay Rows – What To Know