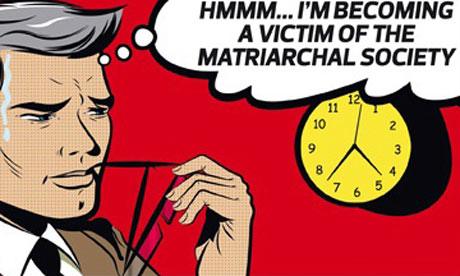 It should come as no surprise, most office sexists have no idea that they are, in fact, offending their co-workers. It should also come as no surprise that most sexists are men, considering they are the primary species that can be kicked in the face with a bladed stiletto, and still think they have a chance at getting with that woman. Studies suggest that men are terrible at reading the facial cues of women, meaning that an eye squint and grimace, saying, “Get the hell out of the lady’s bathroom,” might be taken as, “Well, hello there big boy, why don’t you come on in?” This means that despite the popularity you boast, you could very well be that creepy office guy whom everybody is whispering about.

To help you out, Urbasm is offering the 3 most common signs… that you could be the office sexist.

The Divorcee Sexist
Do you find yourself telling every attractive woman that your marriage is on the rocks? Then you just might be the divorcee sexist!

Famous line: My wife won’t give me a divorce!!! Jesus, I’m lonely!

Sexist Office Complimenter
Have you ever reached out to give someone a stellar compliment, and only managed to cripple their self respect worse than hitting it with a bat? Then you might be the sexist office complimenter.

Famous Line: Women would make better leaders then men… if they weren’t so damn emotion! But hey, that’s a good trait too!

Indecent Proposer
These are the guys who would like to think they are a big enough roller, that they could buy a night with just about any woman. However, once the realization hits that they barely have the money for a stick of gum after their child support check goes through, they try to impress with the promise of an office promotion.

Famous Line: Upper management could use a woman like you. Let’s go to the motel 6 to discuss any openings we may (or may not) have.

Filed Under: Culture, Relationship Tagged With: office politics
Recommended reads:
How To Be A Better Man
Best Men’s Sites and Blogs
Pendlay Rows – What To Know